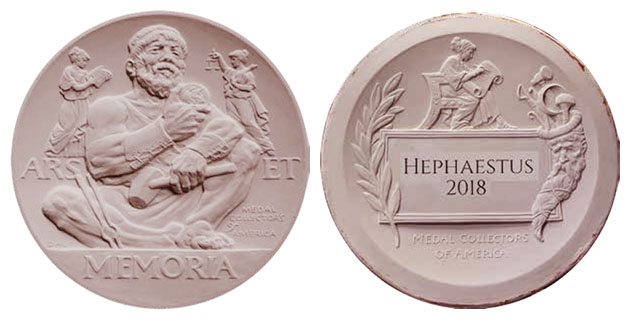 In 2017, the Board of Directors of the Medal Collectors of America (MCA) decided that it would be appropriate for winners of the Carl Carlson and Georgia Stamm Chamberlain awards to actually receive a medal, rather than a plaque as had been awarded in the past. To that end, a committee was appointed and charged with the task of developing a concept and design that would be worthy of the awards. Given the size of our membership and the funds available for this project, it was decided that one design would have to suffice for both awards. The plasters shown above, reflect the result of the work of that committee.

The obverse of the medal depicts Hephaestus, the Greek god of artisans, craftsmen and sculptors, whose symbols typically include the hammer, anvil and tongs. In Roman mythology his equivalent was the god Vulcan, He is shown contemplating his most recent creation, a medal of Athena while Clio, the muse of history stands over his right shoulder and Mnenosyne, the goddess of memory stands over his left. This neatly reflects the newly adopted motto of the MCA, Ars et Memoria. In Roman mythology, Mnenosyne is represented as both the goddess of memory, Juno, and the goddess of money, Juno Moneta.

At the center of the reverse is raised panel for the engraving of the award, the year and name of the award recipient. Clio sits above the panel, recording this to history. The obverse design is echoed at right in the face of Hephaestus shown on a cornucopia containing the tools of his trade.

The medal was designed by the distinguished artist Eugene Daub, whose signature appears in small letters below Hephaestus’ right knee on the obverse. The 3” medal will be struck in high relief with slightly concave fields by Medalcraft Mint, Inc. out of Green Bay, Wisconsin. The Chamberlain award will be issued in antique bronze, while the Carlson award will be finished in nickel silver.