AMERICA'S FIRST medal series honored artists. But they had to donate a painting to get this honor. Americans copied a scheme used successfully in England to offer native art - paintings, engraved prints, sculpture and medals - to the public.

Art-Union promoters sold memberships for five dollars. Every member was guaranteed to receive at least an engraved print. With these proceeds, art work was purchased from American artists and these, in turn, were distributed by lottery. On the day of the drawing, December 24th, crowds of members filled the Tabernacle on Broadway in New York City. Many went home with an early Christmas present.

Medals in bronze and silver were among the winning art works. This continued for three years before the anti-lottery laws halted the plan. However, a different medal had been created for each of the three years; each medal bore a portrait of a famous American painter.

The medals were designed by Peter Paul Duggan (c1800-1861), and engraved by Charles Cushing Wright (1796-1854). For the obverse of the first medal, Washington Allston, Duggan created a bas-relief portrait Wright used as a model. For Gilbert Stuart, he had an artist friend, Salathiel Ellis (1803c-1879), create the relief portrait. For John Trumbull, Wright modeled from a portrait by Robert Ball Hughes (1806-1868).

Georgia Chamberlain (see references below) tracked down the present location of these portrait models. She even learned the predecessor portraits those were copied after. Today with digital photography so prevalent, it is difficult to imagine a world without photographs, all images had to come from some artist’s creation.

Duggan's reverse design is the same for all three medals. But Wright engraved a new die each year -- by hand in those days -- he added Duggan's signature three different ways! Other than this there are bound to be differences between the three reverse dies. We will leave this chore, perhaps, to one of our coin-collecting brethren who are accustomed to examining microscopic die variations of LIB on Lincoln cent obverse lettering to come up the these die differences. No two hand engraved dies are exactly alike.

There is no rule that if you omit the hyphen between Art and Union you would be considered a country bumpkin, uneducated. But like the name New-York Historical Society – including the hyphen was the spelling custom of the day – which continues to present. If you include it, you are hip, with it. (But if your computer search comes up empty with the hyphen, try it without.)

There is a rich literature in both 19th century periodicals and published books on the American Art-Union. This continues, particularly with descriptions of paintings that passed through the Art-Union. Data on the medals is not that prevalent, however, but major works which mention the medals are listed in the References below. 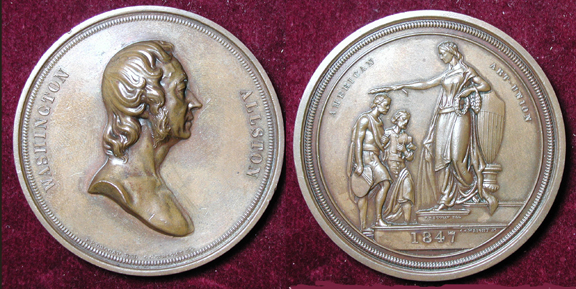 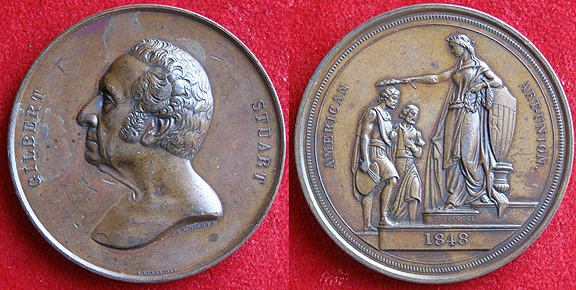 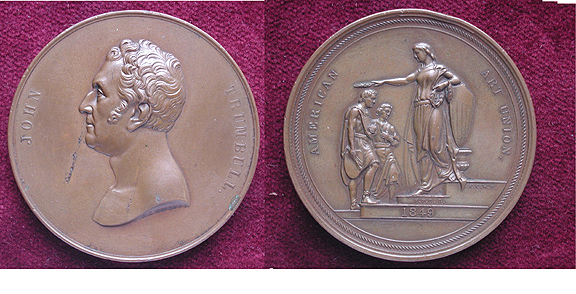