Circle of Friends of the Medallion

The early history of the Circle of Friends of the Medallion, America's first private collector medal series, are intertwined among two sets of brothers and two other men, all of New York City. Most important, perhaps, were the Weil brothers, Henri and Felix, who made the first medals and who later were to operate the Medallic Art Company. Henri had worked for the other set of brothers, Edward and Charles Deitsch, who operated a medallic company for a brief time.

The other two men were Robert Hewitt Jr. and Charles de Kay. Hewitt was a medal collector, forming an extensive collection of Lincoln medals (which he later donated to the U.S. National Collection at the Smithsonian). De Kay was an author, newspaper columnist, gadabout, and today would be called a “jetsetter.”

Both men had traveled extensively and had purchased medals in Europe. At this time there were two series of medals currently being issued, one in Paris (Société des Amis de la Médaille Française), another in Belgium (Société Hollandaise-Belge des Amis de la Médaille d’Art). Who got the idea to commence a similar series of medals in America, we do not know.

But Hewitt and de Kay approached the Deitsch brothers to produce the medals. Hewitt, who had made his fortune in New York City real estate, probably underwrote the venture. De Kay would promote the series, both in his writings and among his vast circle of friends, including the well-to-do and art patrons.

The Deitsches were involved only for a brief time. They wanted out after the first two medals were issued. They sold the medal-making equipment to the Weils (and ultimately the Medallic Art Company name), but surreptitiously sold the rights to the Circle of Friends to their competitors in Philadelphia, Joseph K. Davison's Sons. After four years and nine medals Davison’s dropped out.

The Weils produced the last medal – number 12 – but the series lacked the momentum to carry on after that. However, the series did serve a greater purpose, perhaps, as the forerunner for The Society of Medalists, which began at Medallic Art Company a generation later, in 1930.

The Medals were issued in diecut pages bound in tan cloth books making the set a bookshelf collection. From published membership lists it can be surmised that no more than 500 of any of medals were issued. Allan Newman's number twelve is the scarcest. Victor Brenner's number four, Motherhood, is the most popular. Paul Manship's number eleven is the most expensive (sought after by art galleries). Members of the Bahai religion seek issue number seven, of Abdul Baha, since their religion did not sanction portraits.

Printers and binders varied as well over the seven-year term. Their names are found in the colophon at the end of each volume. Two such varying names exist on issues four and nine. 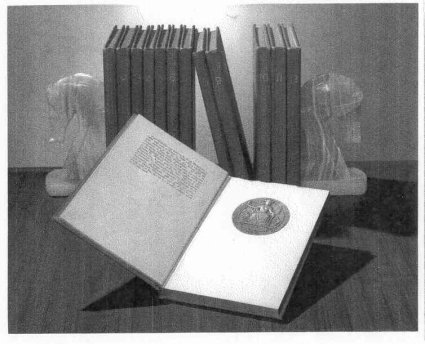 All twelve Circle of Friends of the Medallion in their binders.

A printable formatted version of the MCA Circle of Friends of the Medallion Collector's Guide (pdf) is available.

[I did not choose this pretentious title – it was changed by the magazine’s editor –DWJ.]

Set of CoF books illustrated, as well as individual medals and the two men who founded the series, Charles De Kay and Robert Hewitt Jr. Chart with estimated number of medals issued and other data also given. Sales prices of each of the issues, both in books and as separate medals (prices, obviously, current only for 1977).

An article on the website of the Professional Coin Grading Service (PCGS) by Ed Reiter entitled "A Milestone For The 'Circle of Friends' [of the Medallion]" and posted May 24, 1999 was largely based on this Specialized Report.

Contains: Luftschein (Susan). Charles De Kay and the Circle of Friends of the Medallion; Aesthetic Taste in America, p 235-262.