The November/December issue of the MCA Advisory included an article by John Sallay entitled "The Evolution of Medal Collecting, Part 2: Beyond eBay". John's earlier article (Part 1, in the September/October issue) discussed the emergence, growth, and current status of eBay as a medal collecting resource. This second article provides an overview of the many other new transaction, information, and social aspects of the web that are now relevant to the hobby of medal collecting, and surveys some of the major online resources now being used by medal collectors. It then explores some of the broader trends and possibly interesting web/mobile upstarts from similar collecting hobby arenas and mobile/social interaction generally. John's survey of the Medal Collectors' Digital Landscape includes hundreds of links in four exhibits.

A group of Young Numismatists from The Brenham Community Center in Texas asked that we post an article of interest to their group: A beginners guide to Numismatics. We are delighted to do so. Click here [⇗] for a link to this article. Click here (pdf) for information on how to join our group of MCA Young Numismatists. Membership is FREE for the first year and entitles such members to our MCA Advisory, which has exciting articles on medal collecting.

In his concluding remarks at the end of his comprehensive article "Anti-Semitic Bigotry as Chronicled by Historical Medals" -- that was serialized in the first three issues of The Shekel published in 2015 -- the author Dr. Benjamin Weiss states: "In reviewing the history of intolerance against the Jewish people, as reflected in historical and commemorative medals, and the role medals have played in recording and even promoting such religious bigotry, we find that a wide variety of anti-Semitic medals were produced as early as the 16th century and continue into present times. These medals were engraved by highly regarded medallists, using historically recognizable iconographies and often employing religious passages taken directly from both the Old and New Testaments of the Bible as supportive evidence for the slander the medals portray. The answer to the question of how anti-Semitic feelings have been perpetuated for centuries, having been passed down through generations and generations of individuals throughout the world, is multifaceted. Partly, it appears to be through the informal indoctrination of children through the telling and re-telling of anti-Semitic tales in the homes, and through formal religious literature of society."

Over 70 pages in total were devoted to this book-length opus that began with Korn Jude medals in the late 17th century, which "were distributed coincident with periods of rising food prices and famine and were designed to perpetuate the myth that the Jews were to blame for these hardships and to portray Jews as diabolic speculators, particularly in grain crops." Anti-Semitic medals were issued in Germany as part of the Nazi campaign of hate during the Holocaust. One of these, issued in 1939, was titled "Why We Fight." The obverse depicts a German soldier with industrial and agricultural workers, the legend reading (translated), "Greater Germany Fights for Peace Against the Shame‑Treaty of Versailles." On the reverse can be seen a large caricatured Jewish figure wearing a Star of David, with flames behind him and images of money and weaponry before him, with the legend below reading, "For What Do Our Enemies Fight". Why We Fight medal by unidentified medallist, Germany, 1939.

Anyone joining the American Israel Numismatic Association before the end of the year will receive all 2015 issues of The Shekel, The Quarterly Journal of Israel and Jewish History and Numismatics, including the three issues containing Dr. Benjamin Weiss' article "Anti-Semitic Bigotry as Chronicled by Historical Medals," along with other articles ranging from ancient Judaean coins to the coins, medals and paper money of modern Israel, as well as articles about personalities such as electronics genius Charles Steinmetz and Dr. Jonas Salk, plus much more. To join, send $25 ($35 overseas) annual dues to AINA, PO Box 20255, Fountain Hills, AZ 85269 or call (818) 225-1348.

The full article can also be read on the amuseum website [⇗] (The Jewish Museum in Cyberspace).

Our next scheduled meeting of the MCA will take place in conjunction with the ANA meeting in Chicago, as part of the Worlds Fair of Money. The ANA meeting will be held at the Donald E. Stephens Convention Center on August 11-15, 2015, in Rosemont (Chicago) Ill.

Our MCA meeting is scheduled from 3-5 on Thursday, August 13th in room 24.

Two of our members will be giving talks as part of the World Money Stage Presentation. Larry Gaye, Numismatist and Portland Oregon area C4 member will be giving a talk entitled, "The Otis B. Wright Collection of Washingtonia and Early U.S. Political Medals in the Portland Art Museum". This is an exceptional collection of material donated to PAM in 1913. Dr. Wright was a physician and early pioneer of the use of X-Rays in medicine. He was a director of PAM prior to the donation of his collection to the museum.

MCA's own esteemed Bob Fritsch will be presenting a talk "Tools of Numismatics: Presenting your Collections."

All are invited to attend.

For a complete Schedule of Events of the ANA meeting, click on this link [⇗].

This announcement was kindly sent to us by Mel Wacks, Director of the Jewish-American Hall of Fame and Chair of the AMY Planning Committee of the American Medallic Sculpture Association (AMSA). 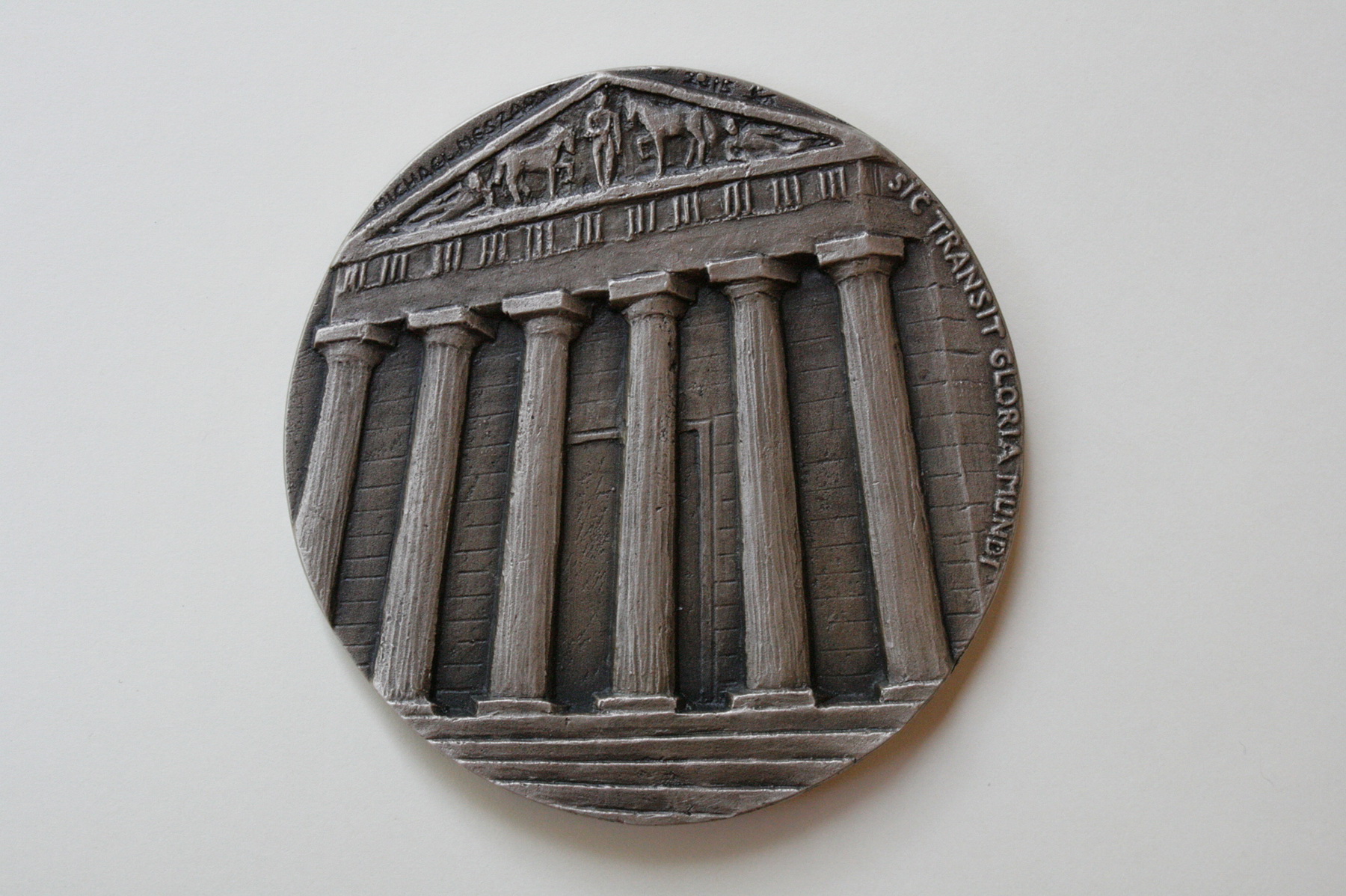 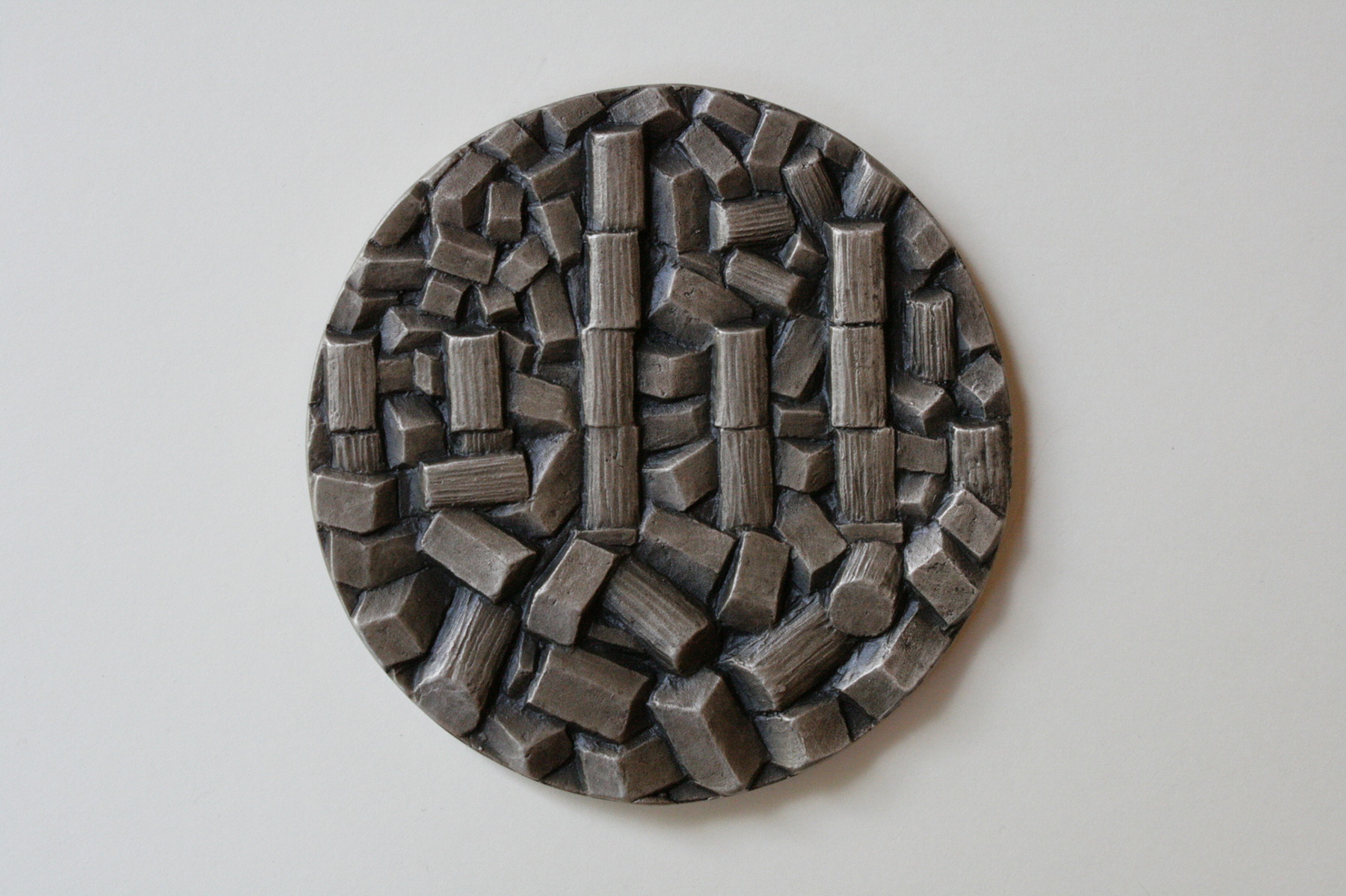 Michael Meszaros indicates that "My thoughts leading to this design were prompted by the arrogance of so many of today's leaders and politicians combined with a visit to Rome in October 2013. With my wife, we spent a lot of time wandering around the forums and other ruins. I had become familiar with them originally in 1969 when I spent seven months there studying at La Scuola dell'Arte della Medaglia. Having studied architecture in Melbourne, I am familiar with how many regimes over the centuries have tried to cement their political futures with overblown neoclassical architecture. Most of them have collapsed or are much reduced. All these thoughts combined to the design where the ambitious building is on one side and the eventual demise is on the other. I have always liked the idea of a double sided medal with a time lapse between the sides and it seemed to all fall together. Using the Romans own saying for the title shows that even they realized that nothing is forever."

Collectors interested in this prize-winning 99mm bronze medal, weighing 12.4 oz., limited to 40 pieces, can obtain it from Meszaros for $325 including shipping by contacting him at meszaros.sculptor@gmail.com.

Nominations for the American Medal of the Year were invited from medalists, mints, jurors, AMSA members, or anyone else by March 1, 2015 for the preceding calendar year. Meszaros was able to enter as an AMSA member. Later this year, he will be presented with the AMY Award, designed by Heidi Wastweet.

The seven distinguished jurors are: Philip Attwood, Curator of Medals, Department of Coins and Medals, British Museum and editor of Medals; Cory Gillilland, Member of the Consultative Committee of Fédération Internationale de la Médaille d'Art and formerly Curator and Deputy Director of the National Numismatic Collection at the Smithsonian Institution; Barbara Gregory, editor of The Numismatist; Arthur Houghton, former curator of antiquities at the J. Paul Getty Museum and president of the American Numismatic Society; Steve Roach, editor of Coin World, and formerly paintings specialist at Christie's; Dr. Alan Stahl, Curator of Numismatics, Princeton University, and one of the founders of AMSA; and Dr. Benjamin Weiss, medal collector and author, member of the board of directors of Medal Collectors of America and its webmaster.

The voting was very close, with one juror having to break a 3-3 tie. The runner-up was Invisible Reconnoiter I by the prominent American medalist Mashiko.

It was the hope of the AMSA Board that an annual American Medal of the Year would inspire the members of AMSA in particular and all American medalists in general to create more art medals. Mel Wacks, chair of the AMY Planning Committee, indicated that "The high quality of the first year’s entries bodes well for the future of the competition and for medallic art."

The American Medallic Sculpture Association invites American and world medalists to join, as well as art medal collectors. The AMSA newsletter publishes news of workshops and exhibits, and illustrates noteworthy art medals produced by members and others both in the United States and overseas. Dues of $40, U.S. and Canada, or $50 elsewhere can be sent to AMSA, P.O. Box 1201, Edmonds, WA 98020. Their website is www.amsamedals.org [⇗].

For further information or questions, contact Mel Wacks at numismel@aol.com.

Jack Hinton, Associate Curator of European Decorative Arts & Sculpture, announced the opening of a new gallery at the Philadelphia Museum of Art in Philadelphia, Pennsylvania. Titled Art and Wonder: A Cabinet of Collections, the gallery displays a collection of extraordinary objects and works of art from the 16th to early 18th centuries. Among the highlights of the exhibit are a group of portrait medals from the collection of Benjamin Weiss. The collection includes 17th century medals by Muller, Dadler, Soldani-Benzi, Vismara, Hamerani, van Abeele, and Dupre. For more details see this link (pdf).

The 2014 MCA awards were issued as follows:

The Carl Carlson Award, named for a true pioneer in the field of researching medals, is awarded to individuals who have made major long term contributions. This year's recipient is Tony Lopez. The Georgia Stamm Chamberlain Award, named for a writer known for exploring uncharted waters, is awarded to promising newcomers in the field of researching medals. This year's recipient is Ruth Britt. Our hearty congratulations to both of these outstanding individuals.

HEAR YE, HEAR YE, Young Numismatists. We invite you to join our Medal Collectors of America. The membership for those 18 years of age or younger is FREE of charge, AND it entitles you to a free online subscription to the MCA Advisory, the magazine of our organization, which is filled with exciting and informative articles on Historical and Commemorative Medals. Join with those who are also instilled with the fervor of learning the History and Art of Medals. Share their interests and camaraderie. All you have to do is fill out and submit the MCA Young Numismatist Application Form. For more about this program please see this link (pdf).