The 2018 annual MCA medal features Hermes, son of Zeus and the Pleiade Maia, (known also as Mercury in Roman circles), bringing seven years good fortune from the Gods. The reverse, with the winged foot of Hermes, shows that Medal Collectors of America has reached its 20 year mark! 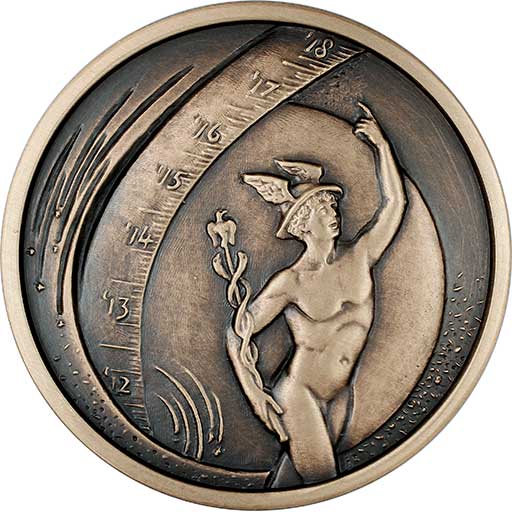 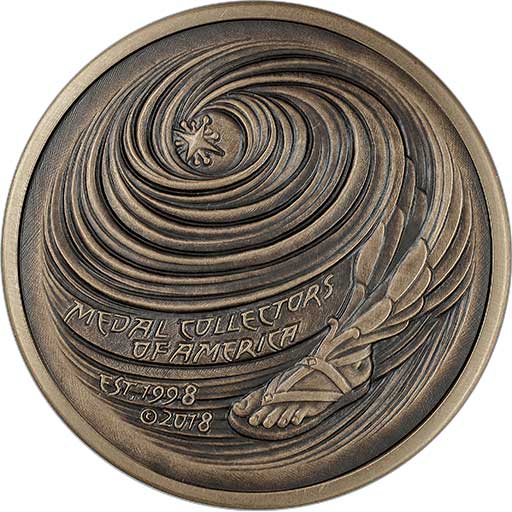 The medal measures 2.5" in diameter. It is approximately 5.25 mm thick and weighs 4.07 oz (115.4 grams). The silver medals contain at least 5 ounces of silver. The price for this year's bronze medal is $50, the silver is $275. Bronze medals are available now and silver medals will be struck immediately after the March 15 deadline. Orders can be sent to Skyler Liechty or Neil Musante.

The 2018 club medal will be the final entry from the great team of artist Alex Shagin and MCA member Gerry Muhl. We are very fortunate to have had their support. Starting in 2019, and each year following, the plan is have the annual medal designed by a different artist.

The MCA issued its 2017 Annual Awards at the ANA World's Fair of Money in Denver at the beginning of August. The Georgia Stamm Chamberlin award, for newcomers in the field of medallic research, was awarded to Chester Sullivan. Dr. Sullivan is a professor at the University of Kansas and a Castorland medal specialist. Our Carl W. Carlson award, for lifetime achievement in medallic research, was presented to John Kraljevich. John’s expertise has been sought out by institutions such as the Smithsonian and the ANS. He is a dealer and cataloger of Colonial coins and medals, with a general knowledge of U. S. numismatics that is almost encyclopedic.

The MCA will hold its next meeting at the ANA World's Fair of Money in Denver. The meeting will take place on Thursday, August 3, at 2:00 P.M. - 3:00 P.M. in room 406 of the Colorado Convention Center. Our keynote speaker will be Mel Wacks, the founding director of the Jewish-American Hall of Fame. There, Mel has overseen the creation of almost 50 art medals issued annually since 1969, produced plaques that are on permanent display at the Virginia Holocaust Museum in Richmond, and created the award-winning website where his Handbook of Biblical Numismatics can be found.

Mel will be speaking about the medallic art of Victor Ries (1907-2013), who created the unique shape of the Jewish-American Hall of Fame and designed two medals (Judah L. Magnes and Touro Synagogue) and of his sister, Gerta Ries Wiener (1898-2000), who designed eleven medals for the Jewish-American Hall of Fame (Louis Brandeis, Gershom Mendes Seixas, Henrietta Szold, Golda Meir, Rebecca Gratz, Isaac Stern, Emma Lazarus, Adolph Ochs, Benjamin Cardozo, Bela Schick, and Ernestine Rose.) Neither Victor nor Gerta ever designed medals for anyone else!

There will also be a variety of other talks at the ANA related to medals:

In May of 2017, Ben Weiss resigned his position as Webmaster of the MCA website after 10 years of service, writing this letter to his colleagues:

More than 10 years ago John Adams asked me to assume the responsibility of being Webmaster of the Medal Collectors of America. During this time, with the enormous help and encouragement of many others, we have made many innovative additions, such that our website medalcollectors.org is now one of the most widely viewed websites of its type on the web.

As much as I enjoyed being your Webmaster for the past 10 years and getting to know you all personally and to learn to appreciate your many talents and contributions to our field of medal collecting, I believe now is the time to turn this over to a new person, one who may have new ideas and energies to devote to our website, to modernize it both in looks and function and generally improve it still further.

As I see it, the first order of business, is to design a new website, perhaps with a new logo, that is more professional and interesting looking, and which has more modern features to access the site in a secure fashion. Additionally, among other new features, such as those made to encourage recruiting new, young members, it should be designed so that only Members can access certain sections, such as recent editions of the MCA Advisory (accessed with a Members Only login credential).

Finally, I wish to thank you all for being so cordial and helpful in all of our interactions in my capacity as Webmaster and look forward to dealing with you all in a less formal capacity.

Please accept my best wishes to all of you,
Ben

A PDF file of this letter, along with responses from several of the officers and members of the Board of Directors can be found at this link (pdf).

At the past Meeting of the American Numismatic Association (ANA) World's Fair of Money, held August 2016 in Anaheim, awards were presented to a number of our MCA members for their outstanding contributions to the field of medallic art.

John Kraljevich, former Vice President of the MCA, was named "Numismatist of the Year" by the American Numismatic Association.

Harry Watterson, who has written excellent articles on American Legion medals and is completing a work of the medal sculptor Julio Kilenyi, received the Georgia Stamm Chamberlain award from the MCA.

Neil Musante, our producer of the MCA Advisory, received the Carl W. Carlson Award from the MCA. Neil has just published a marvelous book on Washington medals titled "Medallic Washington: A Catalog of Struck, Cast and Manufactured Coins, Tokens and Medals Issued in Commemoration of George Washington 1777-1890". As John Sally put it: "Neil Musante's new book on the medals, tokens and federal coinage related to George Washington is a beautifully produced, painstakingly researched, and well-written catalogue that every serious American numismatist will want to own and read." A complete review of this book, written by Sallay, as published in the MCA Advisory, can be found at this link (pdf). The two-volume book, destined to be the definitive work on Washington Medals, can be purchased from the publisher, Spink and Sons.

Benjamin Weiss, webmaster of the MCA, received two awards at the ANA meeting for his articles on the role medals play in religious and racial bigotry, as follows: 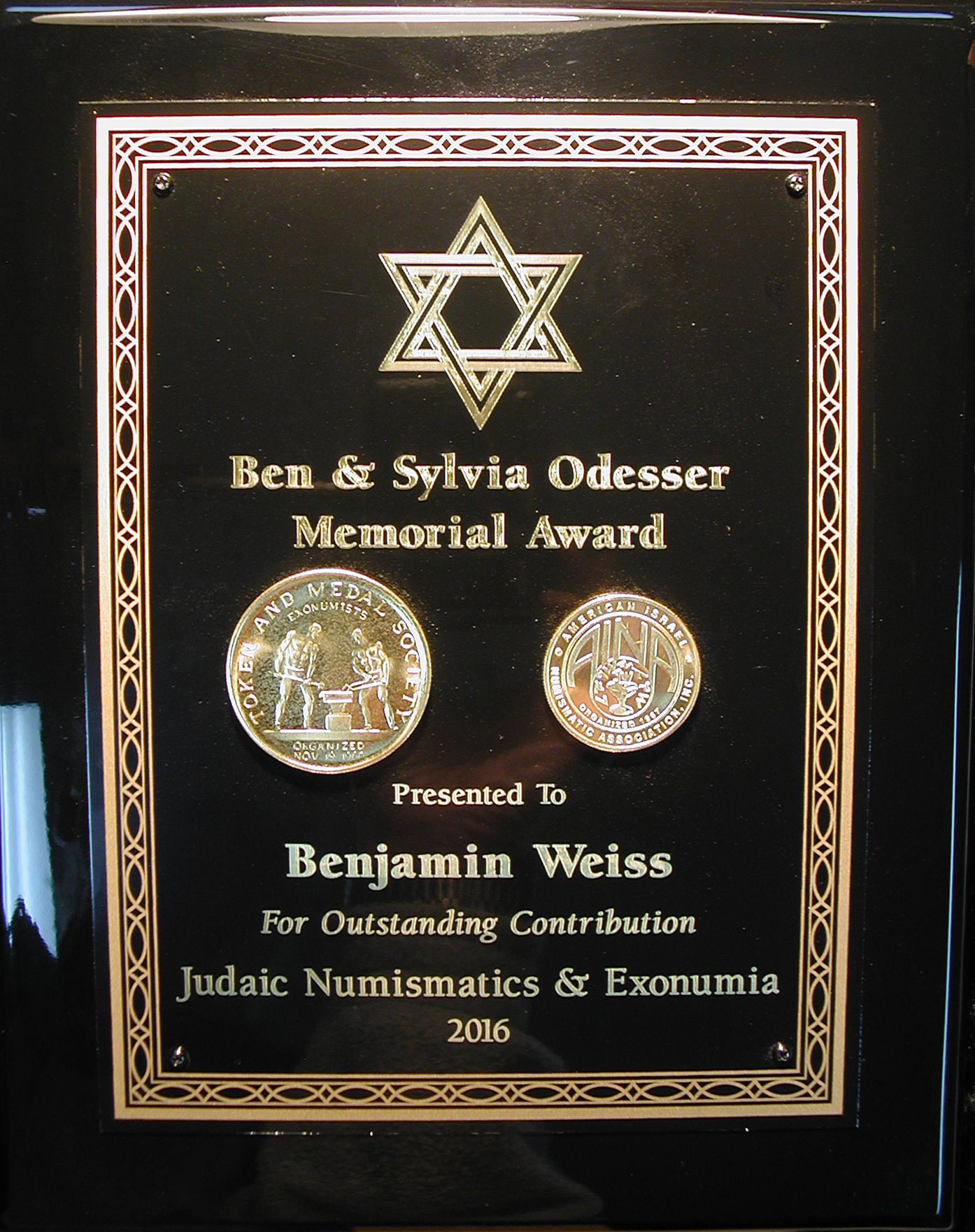 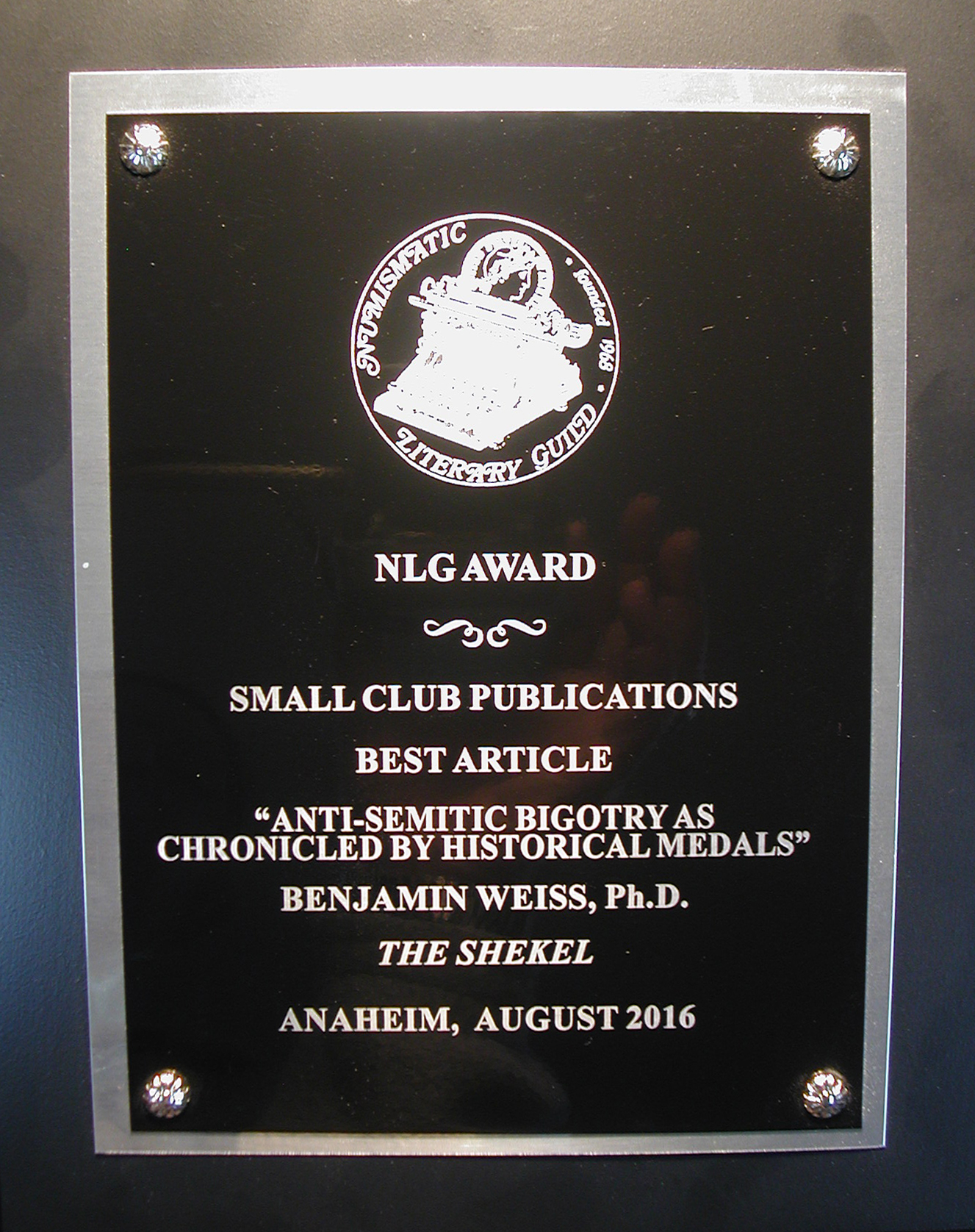 The statement of Ben's acceptance of these awards can be seen here (pdf). The full article can also be read on the amuseum website [⇗] (The Jewish Museum in Cyberspace).